The Source Code is like the Crown Jewels; Git keeps it safe for you!

Software teams know source code is a precious asset whose value must be protected. As you may know, the source code is a repository of invaluable knowledge and understanding about the problem domain that the developers have collected and refined through careful effort. Due to this, it is crucial how the codes would be professionally protected, evolved, debugged, or even collaborated on it simultaneously.

When developers create code (for example, a web or mobile app), they constantly make changes and update the code before and after it is released. Using Version Control Systems (VCSs) protects the source code from human error and unintended consequences. And in terms of Version Control System, Git should be at the top of your list.

The Git project originated in 2005 by Linus Torvalds, the creator of the Linux kernel. Today, Git has grown into an active, well-maintained open-source project. Many software developers are familiar with Git, which works well with many operating systems and IDEs (Integrated Development Environments).

By the end of this article, it will be clear how Git benefits each aspect of every organization, from the development team to the marketing team and everything in between. Git is not just for agile software development but for agile business. 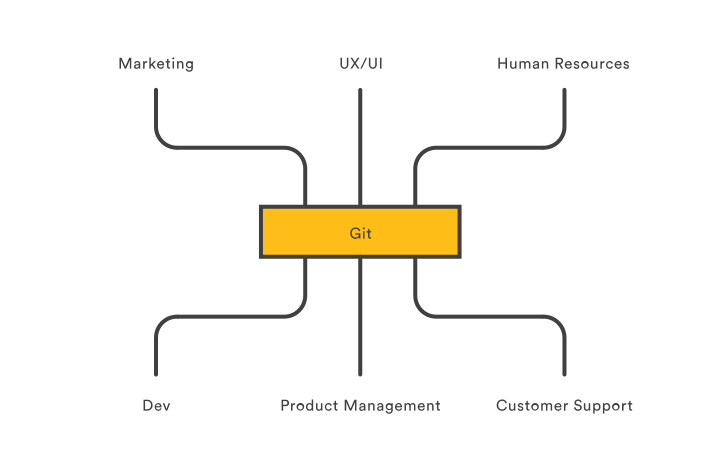 Git is a distributed version control system (DVCS), which means that instead of having only one single place for the full version history of the software, every developer has their own copy of the main code, called a local repository that also keeps a record of all changes. A repository works like a folder where you usually store your entire project (a website, for example).

In addition to being distributed, it has been designed with performance, security, and flexibility.

Git performance has been shown in branching, merging, committing new changes, and comparing past versions. It focuses on the content of files while determining their storage. And for this reason, the source code files are renamed, split, and rearranged on a regular basis.

In Git, the content of files, directories, versions, tags, and commits, as well as the authentic relationships between them, are secured using a cryptographically secure hashing algorithm known as SHA1. This algorithm protects the code and the change history against both accidental and malicious changes. Consequently, it ensures that the history of all projects is fully traceable.

Git is also flexible and demonstrates this in several ways: in support of various kinds of nonlinear development workflows, in its efficiency, and in its compatibility with many existing systems and protocols.

Apart from the Git structure discussed above, features such as branching capabilities, distributed environment, pull requests, and a stable community makes Git one of the most widely used resources for tech organizations and programmers. Git allows teams to develop features, fix bugs, or safely experiment with new ideas in a contained area of their local repository.

But the benefits of Git don't end with the development team; it can help with marketing too; because Git makes it easy to implement new changes, the development team doesn't have to roll so many updates (which a marketing team needs) into one new release. If marketing specialists have three works to do for their website, they can create separate announcements for each, thanks to Git. To be more precise, one team member can work on a minor update that only impacts existing customers while the other is working on a new user interface, and the whole team tries to wrap up a giant, game-changing feature.

It should be noted that Git has some advantages for designers and UI developers. Whereas most of them are encouraged to experiment with different ideas to ensure the best way to make it through to the customers, Gits branch workflow and local repository make it easy for the design team to prototype new UI/UX elements rapidly.

Changes or new ideas can be tested in a local repository before being implemented. This enables designers to see how the changes would look using a working copy of their code without the risk of damaging their users' experience.

Using Git makes updating the code easy, so there is no need to wait for the next major release to fix problems, which means more frequent customer feedback and faster updates. The result of faster fixes is happier customers, fewer support tickets, and ultimately lower business costs.

GitHub is a cloud-based hosting platform for individuals and teams who use Git, making it easier for people to work remotely. GitHub accelerates high-quality software developments and offers social networking features that make it an excellent tool for getting feedback and ideas from the broader software development community. In order to properly describe GitHub, there must be much more details. Therefore, in another article, we will discuss GitHub.

With this knowledge, it is clear why businesses should use Git as part of their agile and time-saving initiatives. Consequently, many teams are already using Git to protect their precious Crown Jewels.

Join us and
leave a mark on the history ofSoftware.

Articles
© 2018 - 2022 Wish Work® Global Inc.All product and company names are trademarks or registered trademarks of their respective holders. Use of them does not imply any affiliation with or endorsement by them.